In her photographs we see oppression, secrecy, struggle and protection. We also see (the idea of) invisibility. 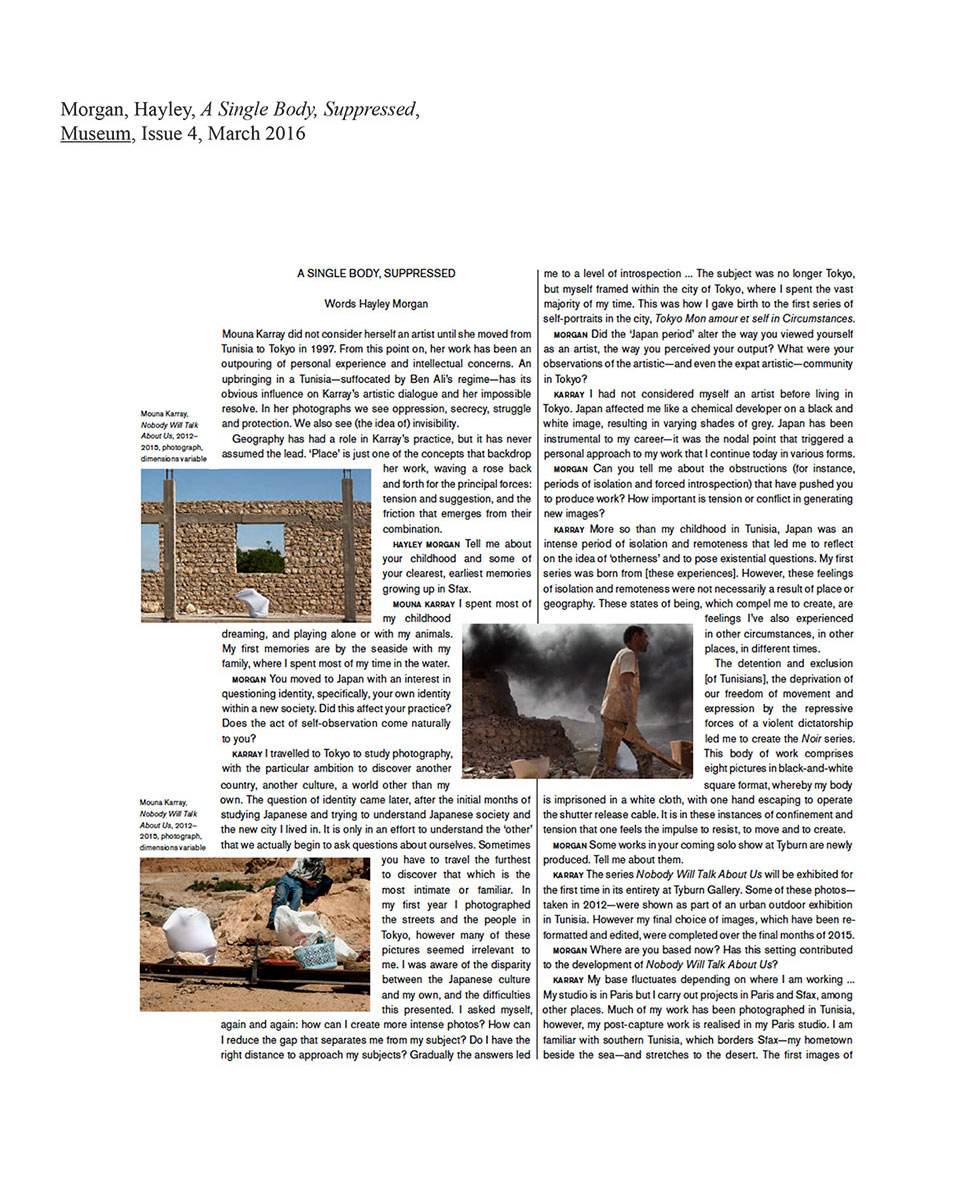 Mouna Karray did not consider herself an artist until she moved from Tunisia to Tokyo in 1997. From this point on, her work has been an outpouring of personale experience and intellectual concerns. An upbringing in a Tunisia –suffocated by Ben Ali’s regime– has its obvious influence on Karray’s artistic dialogue and her impossible resolve. In her photographs we see oppression, secrecy, struggle and protection. We alos see (the idea of) invisibility.
Geography has has a role in Karray’s practice, but it has never assumed the lead. ‘Place’ is just one of the concepts that backdrop her work, waving a rose back and forth for the principal forces: tension and suggestion, and the friction that emerges from their combination.

HAYLEY MORGAN: Tell me about your childhood and some of your clearest, earliest memories growing up in Sfax.

MORGAN: You moved to Japan with an interest in questioning identity; specifically, your own identity within a new society. Did this affect your practice? If so, in what ways? Does the act of self-observation come naturally to you? (I’d also like if you could clarify where in Japan you were spending the majority of your time—was it always in Tokyo, where you were studying?).

KARRAY: I travelled to Tokyo to study photography, with the particular ambition to discover another country, another culture, another world, other than my own.
The question of identity came later, after the initial months of studying Japanese and trying to understand Japanese society and the city I lived in (Tokyo). It is only in an effort to understand the ‘other’ that we actually begin to ask questions about ourselves. Sometimes you have to travel the furthest to discover that which is the most intimate or familiar. In my first year I photographed the streets and the people in Tokyo, however many of these pictures seemed irrelevant to me. I was aware of the disparity between the Japanese culture and my own, and the difficulties this presented. I asked myself, again and again; How can I create more intense photos? How can I reduce the gap that separates me from my subject? Do I have the right distance to approach my subjects? Gradually the answers led me to a level of introspection… In fact the subject was no longer Tokyo, but myself framed within the city of Tokyo, where I spent the vast majority of my time. This was how I gave birth to the first series of self-portraits in the city (Tokyo Mon amour et Self in Circumstances).

MORGAN: Did the ‘Japan period’ alter the way you viewed yourself as an artist and your output? What were your observations of the artistic –and even the expat artistic– community in Tokyo?

KARRAY: I had not considered myself an artist before living in Tokyo. Japan affected me like a chemical developer on a black and white image, resulting in varying shades of grey. Japan has been instrumental to my career, it was the nodal point which triggered a personal approach to my work that I continue today in various forms. Since then, my work has been rooted as much in my personal experience as it is in my intellectual concerns.

MORGAN: Can you tell me about the obstructions (for instance, periods of isolation and forced introspection) that have pushed you to produce work? How important is tension/conflict in generating new images?

KARRAY: More so than my childhood in Tunisia, Japan was an intense period of isolation and remoteness which led me to reflect on the idea of ‘otherness’ and to pose existential questions… My first series was born from this tension and suffering. However, these feelings of isolation and remoteness were not necessarily a result of place or geography. These states of being, which compel me to create, are feelings I’ve also experienced in other circumstances, in other places, in different times.
The detention and exclusion, the deprivation of our freedom of movement and expression by the repressive forces of a violent dictatorship, led me to create the Noir series. This body of work comprises 8 pictures in black and white square format, whereby my body is imprisoned in a white cloth, with one hand escaping to operate the shutter release cable. It is in these instances of confinement and tension that one feels the impulse to resist, to move and to create.

MORGAN: Where are you based now? Has this setting contributed to the development of “Nobody Will Talk About Us”?

KARRAY: My base fluctuates depending on where I am working… My studio is in Paris but I carry out projects in Paris and Sfax, amongst others. Much of my work has been photographed in Tunisia, however, my post-capture work is realised in my Paris studio.
I am familiar with southern Tunisia which borders Sfax (my hometown beside the sea) and stretches to the desert. The first images of Nobody Will Talk About Us were taken about thirty kilometres from Sfax, where a mineral and barren world begins. From there, I then went down several hundred kilometres to the southwest.

MORGAN: Some works in your show at the Tyburn are newly produced. Tell me about them.

KARRAY: The series Nobody Will Talk About Us will be exhibited for the first time in its entirety at Tyburn gallery. Some of these photos taken in 2012 were shown as part of an urban outdoor exhibition in Tunisia. However my final choice of images, which have been re-formatted and edited, were completed over the final months of 2015.

MORGAN: There are themes of secrecy, protection or concealment in your images –particularly within “Murmurer” and “Nobody Will Talk About Us”– but also a distinct curiosity in the dialogue. Can you expand on the origins of these ideas in your practice? Where do these contemplations stem from?

KARRAY: I believe secrecy and concealment are inherent in the way I tell stories and convey my thoughts. I do not seek to reproduce the visible, but instead to render it visible. In Murmurer, the walls are abandoned, open borders. They are enigmatic walls with unique features, they appear as though they are torn between a tragic past and an uncertain future; such structures have always fascinated me. In some of the works in Nobody Will Talk About Us, we also find these anomalies –these almost absent structures whose disturbing presence arouses curiosity. Similarly, the captive body –the restricted subject of the series– depicted along roadsides, paths and amongst local people, seems to call out to us. We do not understand its presence… I refuse to provide a direct message or explicit purpose to the image, instead I prefer quiet and suggestive questioning.

MORGAN: The confronting idea of ‘reality’ is also percolating in your work. Given your upbringing in Tunisia, could this be suggestive of the anticipation of collapsing walls/systems or the exposing of truths?
KARRAY: My creative work is born out of an inner tension, as well as a tension apparent between those around me. Collapsing walls and systems do not really soothe any of these tensions; the realities may change but other walls, new systems, fresh lies rise up to replace the previous ones. The illusion remains –along with the suffering.

MORGAN: Can you talk a little about the relationship between the unidentified/anonymous body and the revealed ‘truth’ of the south Tunisian landscape?

KARRAY: The captive body in a white bag is a metaphor for the disinherited Tunisian South, a South forgotten by authorities since independence, and overlooked up to the present day. The figure embodies the solitude, confinement, and restrictions on these people in their difficult conditions; they exist in a silent poverty, on arid soils whose foundations were rich with minerals, which have been confiscated and stripped from these oppressed –but not submissive– souls. I took the road that crosses these dusty lands, an area that is both lifeless and inhabited, where the captive figure moves. This body is moving within this universe as its matrix; it extracts itself with a gesture that breaks its confinement. This body, in its struggle, in its encounters, in its wanderings, is a figure of resistance, a figure pushing for freedom and the re-enchantment of an abandoned land.

MORGAN: I was reading about your previous use of the square as a format, which refers to the Islamic architectural concept of aesthetics where the square is a basic element. (Is this correct?) Is there an aesthetic/format approach to “Nobody Will Talk About Us” that is meaningful to you?

KARRAY: Yes that’s correct, the square is a fundamental element of Islamic architecture; the sleek style of North African mosques has been as much of an influence on me as Japanese minimalism.
However, in Nobody Will Talk About Us the landscape format became an obvious choice as it allowed me to capture the vastness of the landscape; it left me with more freedom. As this series is a journey and a quest, I wanted the frame to be open, so the landscape and the body are not enclosed in a square format.

MORGAN: The symbolism of the body confined sack seems representative of oppression or struggle – is this directly linked to that of Ben Ali’s regime?

KARRAY: Yes, absolutely, imprisonment and oppression are subjects that have always haunted me and continue to because, through Ben Ali’s party, and their repressive system, he is still there. I started to express and explore enslavement and suffocation with my series Noir, which showed my body trapped in a white cloth. The series represented a struggle and resistance against repression, deprivation of movement and lack of freedom of expression.

MORGAN: I read that the sack idea was sparked by something you witnessed in real life, a live cockrel in a bag on a bus. For me, this sight would be unusual, but perhaps it is commonplace and unnoticed in that environment. This kind of lends itself to the way we see, or don’t see, things going on around us. Is invisibility still an issue in the region?

KARRAY: This was a distant memory from my adolescence, it was perhaps a common sight for people around me but for me it seemed unusual and that’s why it stuck in my unconscious – only to be revealed later on. What is visible for me may be invisible to another: what is strange may appear familiar, the absurd, common. How do we attract the other to what they do not see? The Murmurer series explicates that which is invisible within the country: before that who was concerned about the existence of these walls, of their previous vocation or their possible future? By photographing them, I made them visible.

MORGAN: Is it difficult to make the work that you do? Is it a really hard thing to go out and take photographs of someone in a sack there? Do people care?

KARRAY: During the dictatorship it was difficult to walk down the street and take photos; there was always a police officer who would appear and want to know what I was photographing and why I was photographing it, if I had a permit to do so etc… luckily I had my tricks to avoid them destroying the negatives. After the revolution, it became relatively easier; shooting someone in a bag obviously aroused curiosity, but people would let me photograph in their environment without any problems.

MORGAN: Finally, who is inside the sack? I wonder so much if it is you.

KARRAY: For Noir, it was me: a prisoner photographer whose hand frees creation. For Nobody Will Talk About Us, I used a model because I wanted to distance myself from the captive subject, the symbol of southern resistance.

Hayley Morgan is a Berlin-based writer. 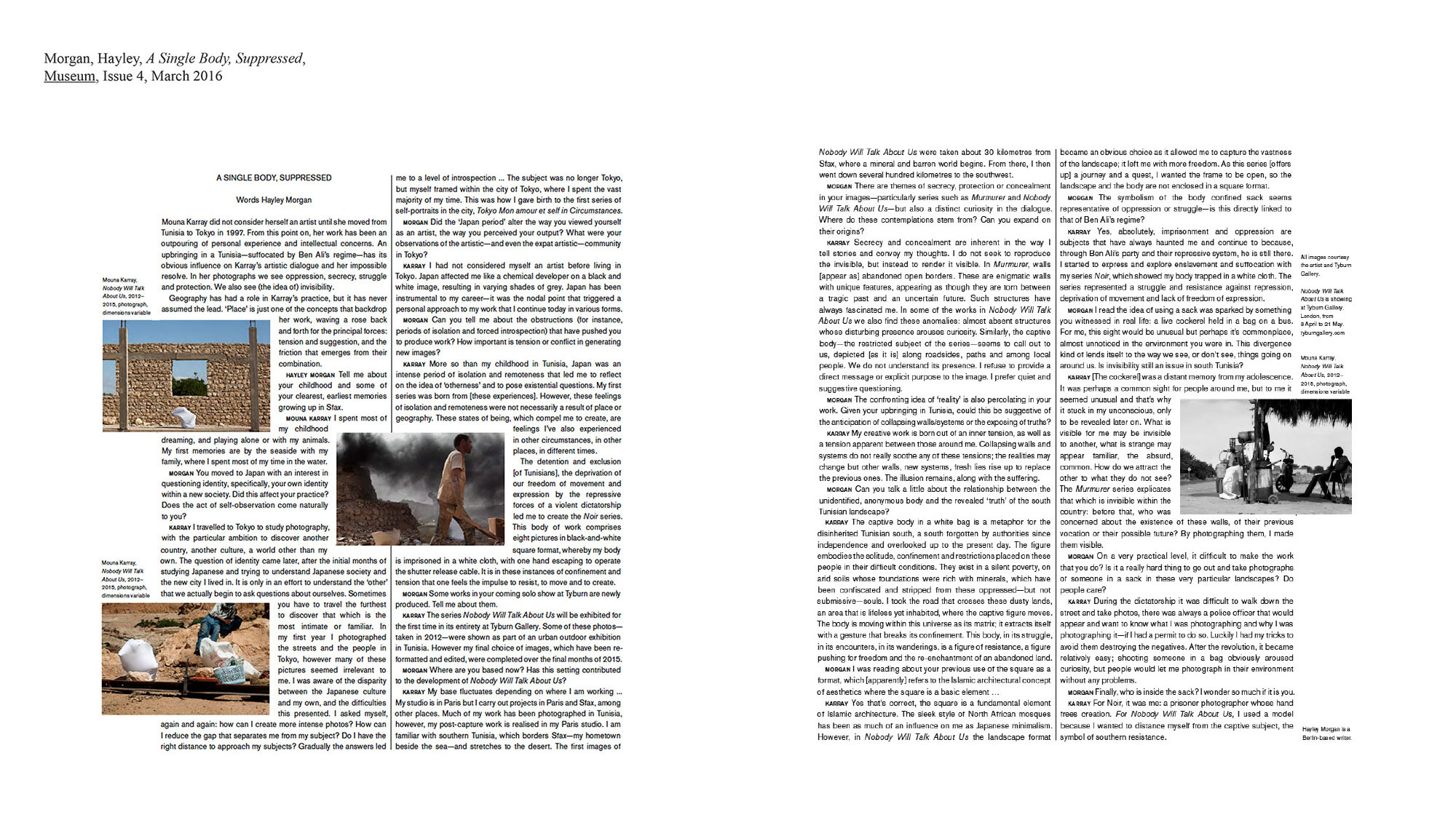