Performing for the camera 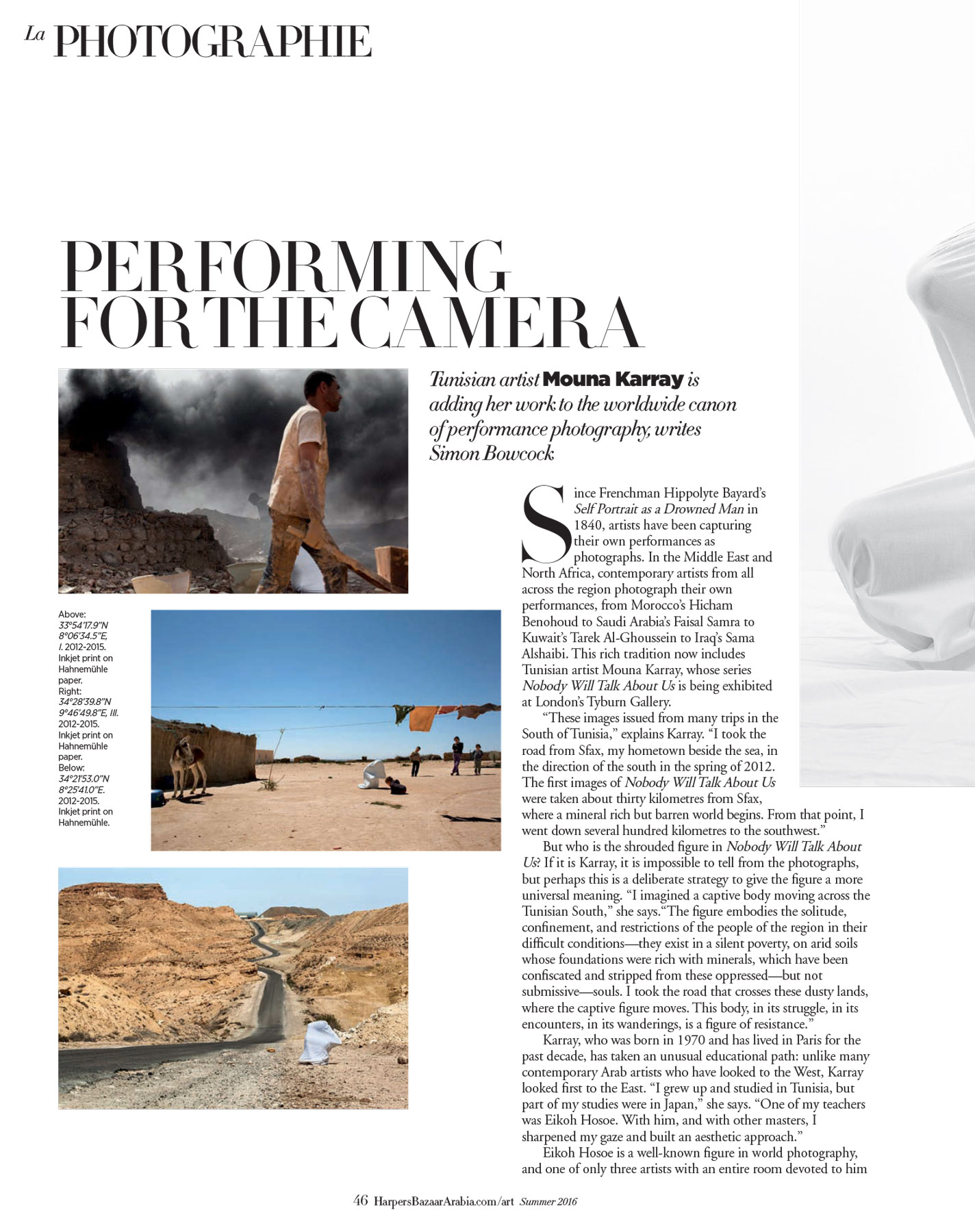 Since Frenchman Hippolyte Bayard’s Self Portrait as a Drowned Man in 1840, artists have been capturing their own performances as photographs. In the Middle East and North Africa, contemporary artists from all across the region photograph their own performances, from Morocco’s Hicham Benohoud to Saudi Arabia’s Faisal Samra to Kuwait’s Tarek Al-Ghoussein to Iraq’s Sama Alshaibi. This rich tradition now includes Tunisian artist Mouna Karray, whose series Nobody Will Talk About Us is being exhibited at London’s Tyburn Gallery.

“These images issued from many trips in the South of Tunisia,” explains Karray. “I took the road from Sfax, my hometown beside the sea, in the direction of the south in the spring of 2012. The first images of Nobody Will Talk About Us were taken about thirty kilometres from Sfax, where a mineral rich but barren world begins. From that point, I went down several hundred kilometres to the southwest.”

But who is the shrouded figure in Nobody Will Talk About Us? If it is Karray, it is impossible to tell from the photographs, but perhaps this is a deliberate strategy to give the fi gure a more universal meaning. “I imagined a captive body moving across the Tunisian South,” she says.“The figure embodies the solitude, confi nement, and restrictions of the people of the region in their diffi cult conditions—they exist in a silent poverty, on arid soils whose foundations were rich with minerals, which have been confi scated and stripped from these oppressed —but not submissive— souls. I took the road that crosses these dusty lands, where the captive figure moves. This body, in its struggle, in its encounters, in its wanderings, is a figure of resistance.”

Karray, who was born in 1970 and has lived in Paris for the past decade, has taken an unusual educational path: unlike many contemporary Arab artists who have looked to the West, Karray looked first to the East. “I grew up and studied in Tunisia, but part of my studies were in Japan,” she says. “One of my teachers was Eikoh Hosoe. With him, and with other masters, I sharpened my gaze and built an aesthetic approach.”

Eikoh Hosoe is a well-known figure in world photography, and one of only three artists with an entire room devoted to him in this spring’s blockbuster exhibition Performing for the Camera at London’s Tate Modern. His most famous series is probably Kamaitachi, photographs of a dancer performing as a demonmade in rural Japan in 1969. But while Hosoe’s influence can be read into Nobody Will Talk About Us, his is only one of many. “My Nippon experience showed that by trying to understand the ‘other’, we actually begin to ask questions about ourselves,” says Karray. “Sometimes you have to travel the furthest place and this leads you to the most intimate or familiar part of yourself. Walter Benjamin says something to the effect that you have to go very far in order to reach that which is very close. Japan has been crucial in my artistic practice, as it was there that I developed a very personal approach to my work. Since then, my work has been rooted as much in my personal experience as in my intellectual concerns.”

These concerns are discernible in Karray’s prior work, particularly the studio series Noir, a clear forerunner to Nobody Will Talk About Us. “For many years the memory of places and people has been always the central theme in my work,” she says.“ How to fight against oblivion? How to transmit the memory? The series Nobody Will Talk About Us engages with these questions. I took these photos of a beautiful and wide southern landscape and integrated a disturbing fi gure, which unsettles both the landscape and the beholder. The captive body also leads to the idea of imprisonment and oppression, which are subjects of the series Noir. These ideas have always haunted me and continue since Ben Ali’s regime and his repressive system.

I started to express and to explore enslavement and suffocation with Noir, which shows my body trapped in a white cloth, with one hand escaping to operate the shutter release cable. The series represents a struggle and resistance against repression, deprivation of movement and lack of freedom of expression.”

Emma Menell, Founder Director of the Tyburn Gallery, sees wider themes in Karray’s art. “I first encountered Mouna’s work at the group exhibition The Divine Comedy at the Museum für Moderne Kunst, Germany in 2014,” she says.“The exhibition featured the powerful work, The Rope, which serves as an allegory of disappearance, fragility, memory and loss. Mouna’s work frequently explores themes of boundaries, frontiers and identity. I am drawn to Mouna’s work as it often features desolate landscapes, yet ultimately offers a message of redemption and hope.” And there is hope in No One Will Talk About Us, even if only for the next generation, as personifi ed by the small child rendered in 34°28’39.8”N 9°46’49.8”E, III. 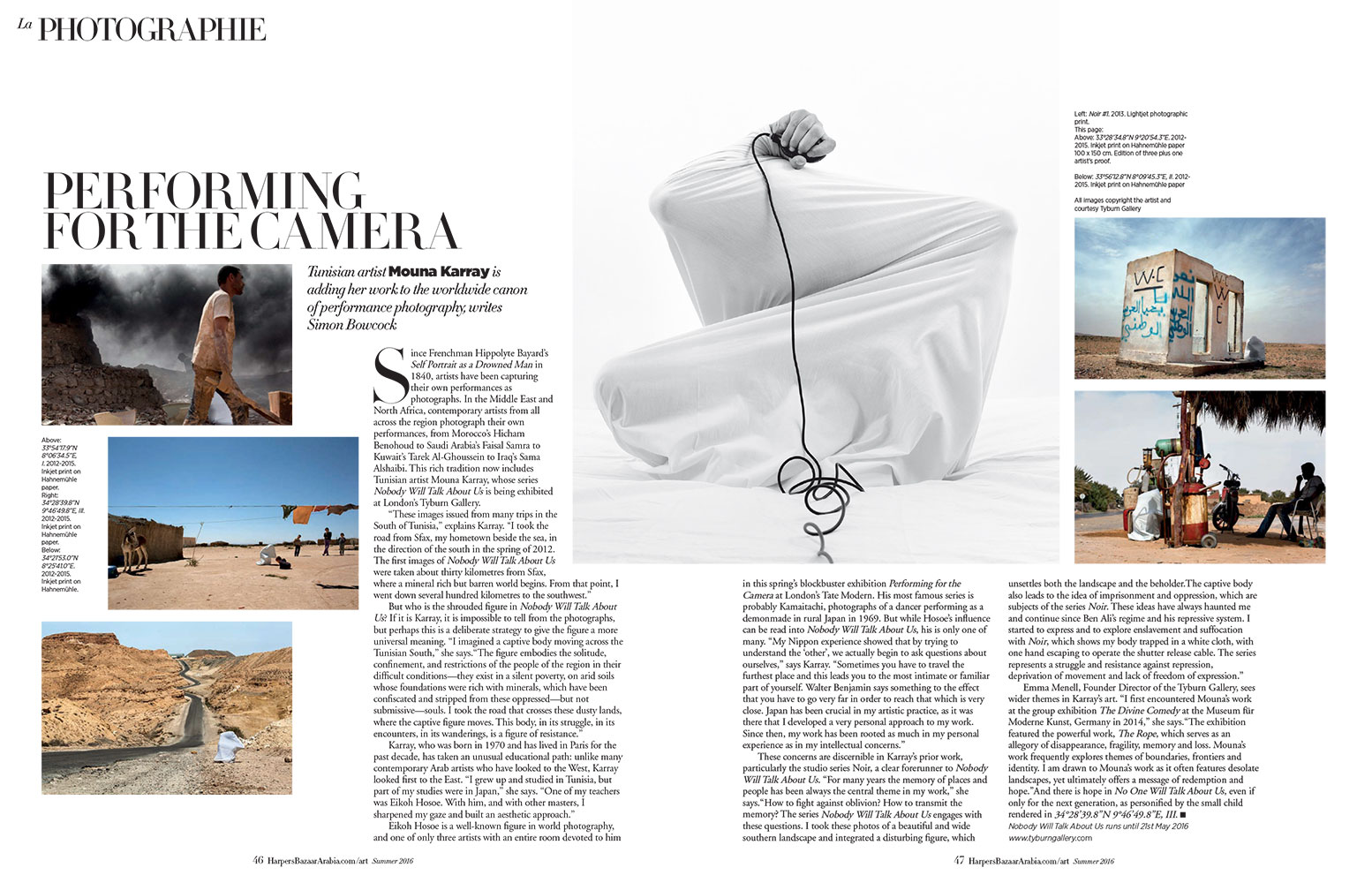