There Is a There There: Place in African Cityscapes 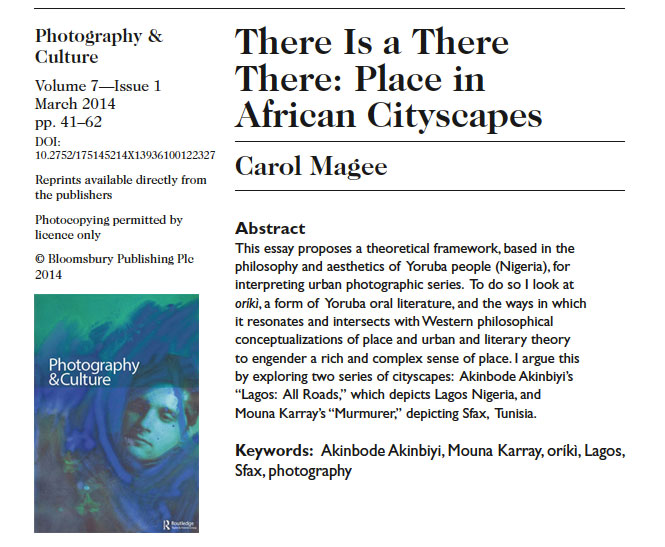 Abstract
This essay proposes a theoretical framework, based in the philosophy and aesthetics of Yoruba people (Nigeria), for interpreting urban photographic series. (…)  I argue this by exploring two series of cityscapes: Akinbode Akinbiyi’s “Lagos: All Roads,” which depicts Lagos Nigeria, and Mouna Karray’s “Murmurer,” depicting Sfax, Tunisia.(…)

Recognizing Sfax
The photographs in the series “Murmurer” (2007–2009) by the Paris-based, Tunisian photographer Mouna Karray, also evidence the components of seriate compositions identified by the Drewals. In the space of a gallery, each photograph in this series appears next to the other, though there is no inherent order to their appearance or their relation to one another. All refer to the larger whole—in this case, the port areas of Sfax, Tunisia. As with the performance of different units of an oríkì or the discrete markingoff of the units of a seriate composition, each individual photograph is marked as a unit, both structurally and compositionally. For example, in Figure 5, the viewer’s eye is drawn in by the strong light on the vertical wall fragment that dominates the left half of the pictorial space. The diagonal of the shadow on this intersects with and leads the eye to the diagonal of the wall on the right. The vertical line that marks the far edge of the wall echoes the vertical on the left, and the fact that the wall dominates the right pictorial space keeps the eye within the space. A small, dark, vertical element on the far left serves as the visual bracket on the other side, and the horizontal of the walls that runs across the lower portion creates a shallow pictorial space and keeps the eye moving within it. The lines within the photographic image, the varying textures of smooth or peeling paint, broken concrete, grass, and sky, and movement between areas of light and dark work, as they did in Akinbiyi’s photographs to deny a single narrative focus. Likewise there are shifts in perspective between individual photographs in the series, so where the space is relatively shallow in Figure 5, in Figure 6, it is expansive. There is a density of meaning in each photograph and in the series as a whole. These various elements combine not to express some aesthetic or worldview that is particularly Yoruba, but, rather, as an affective structure for creating understanding. In this, these components function as they do in Yoruba seriate compositions and oríkì. 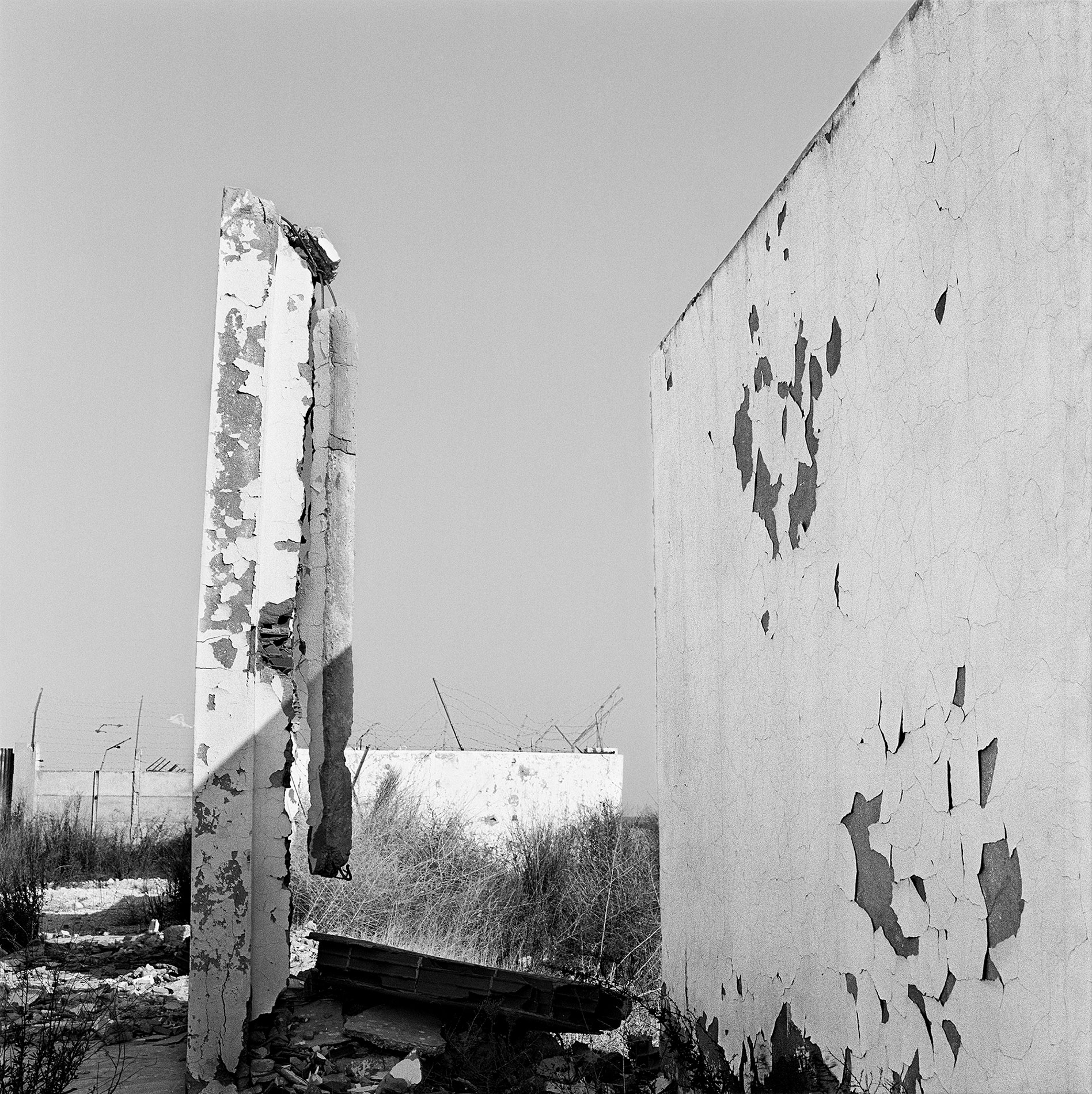 Like Akinbiyi, Karray explores photographically the changes that the city of her birth has undergone. Unlike him, she focuses on a particular section of that city—the port. The more than twenty black-and-white photographs comprising her series show the contradictions of the city. They present signs of industrial ruin (the fragmentation of walls) alongside signs that industry continues (the smoke billowing from the stack, Figure 6; the view of the working port, with ships and loading cranes, Figure 7). Here, as did Akinbiyi’s photograph of Lagos Marina, the photograph suggests the labor of the city without actually depicting work being done. Additionally, as I will soon address, this series speaks to the industry that both sustains the city’s economy and destroys its environmental well-being. Karray, like Akinbiyi, does not offer these comments as explicit critiques, or calls to some specific action. This too aligns their work with oríkì oríle, whose repetitive language structure builds to the articulation of the key phrase—the utterance that encapsulates and evokes the essence of its subject (Barber 1991: 177). The repetitive visual language these photographers employ in their series builds to speak the textured layers of the cities’ characters. In the same way that Akinbiyi’s photographs of Lagos spoke its past and its present, the photos of “Murmurer” are layered stories of Sfax. 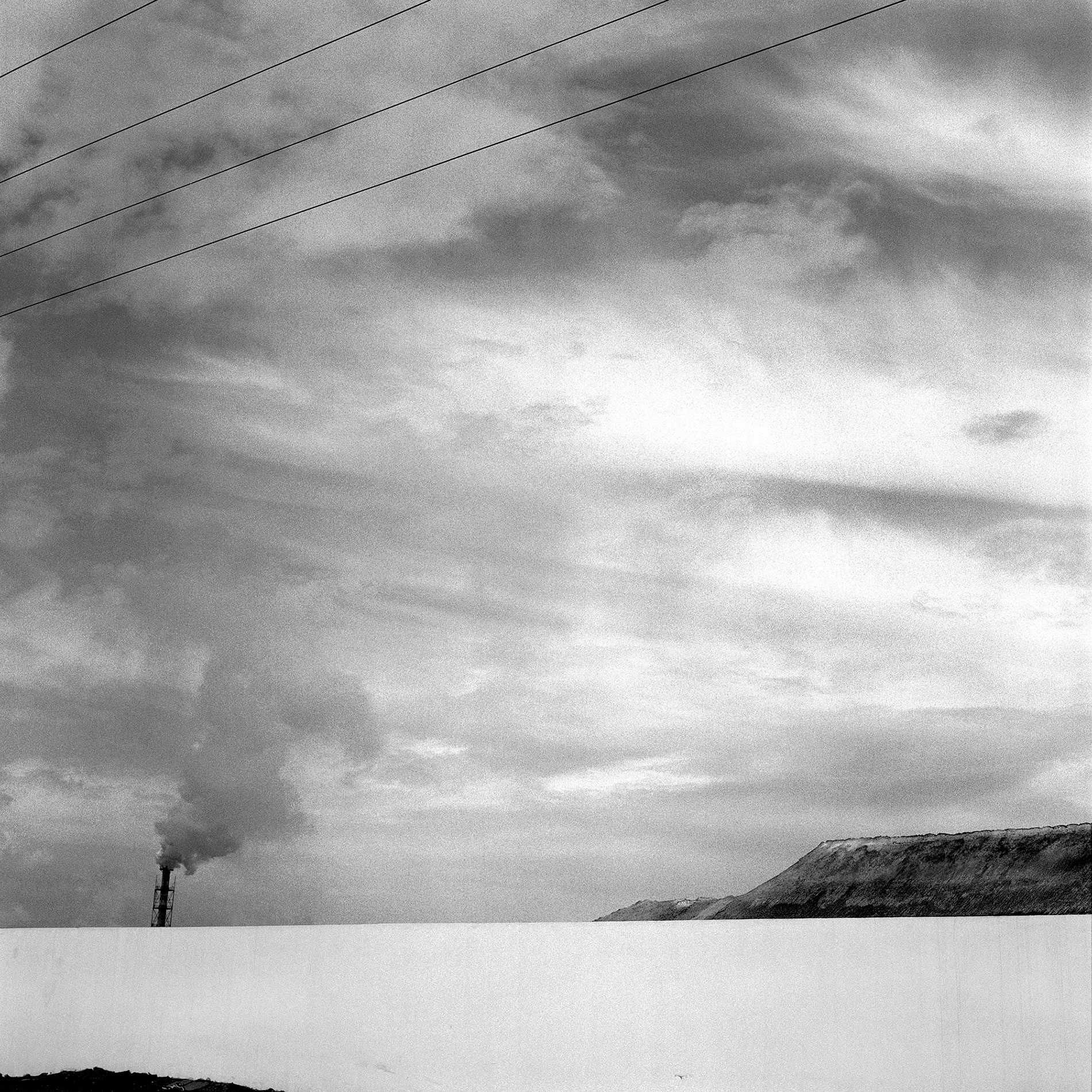 Founded in the ninth century, the city’s significance as a port expanded rapidly in the nineteenth century with the export of olives, nuts, and fish and continued to do so into the twentieth century with the growth of the phosphate fertilizer industry. The presence of the sea in these photographs recalls both its strength as a resource supporting the livelihood of the city’s inhabitants and its fragility as a natural environment. The directional flow of the currents in the bay on which Sfax is located resulted in major pollution of the waters by the 1980s, forcing the closure of the second largest phosphate processing plant in the city and a subsequent loss of jobs (Priority in Action Programme n.d.; Goni and Karray 2011). During the late twentieth century, as the economy of the city declined, the city was left with the deteriorating industrial sites that Karray photographs. The decline of an economy affects people as well as places. Karray’s photographs speak to this as well by depicting largely empty structures that might have housed workers (Figure 8). This juxtaposition of home and work within the series functions synechdocally to evoke the character of the port. The absent laborers serve as conceptual links between these photographs. Yet, there are also discontinuities, as there are both in oríkì and Akinbiyi’s series. This creates layers of meaning. For instance, one photograph depicts a person walking next to the wall, which calls attention to the absence of humans from the majority of photos in this series, from the spaces depicted in them. Yet they are present also, through their absence, for a city is filled with people. 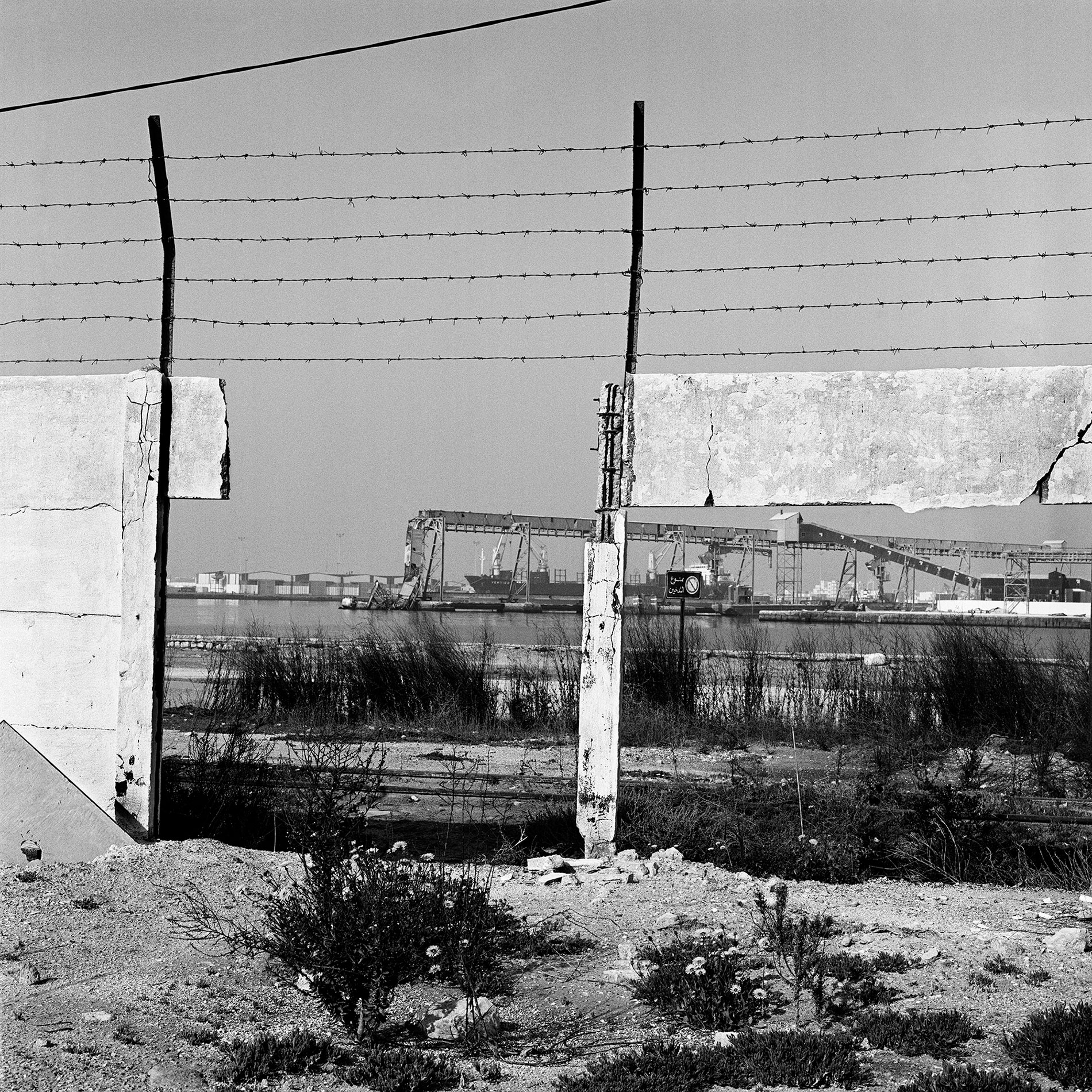 Karray is particularly interested in and attentive to the tension between absence and presence both in this series and in other works. Photography, as a medium, is an appropriate way to get at such tensions. In looking at a photograph we cannot access the smells wafting through the air or feel the grit of the city on our skin. Where there was motion, there is now stillness. Where there was once sound, there is now silence. At the same time as these things are absent, they are also present. Sound is an absent presence in images such as Figure 9 by Karray, where the white caps evoke the sound of the waves crashing endlessly on the shore, and bring to mind their murmur. In fact, the name of the series, “Murmurer,” translates as “to murmur,” underscoring the idea of sound. A murmur can evoke any number of associations: an indistinct sound, a soft utterance, a mutter or complaint. Even if one cannot distinguish what is being said, when someone murmurs, we know that something is being spoken. That Karray invokes the infinitive, “to murmur,” also suggest that she herself is offering these photographs as her murmurs. The infinitive invokes the performative quality of an utterance; to murmur is an act. In this series, Karray speaks the port of Sfax; her photos are an oríkì that notes its character. And as with the speaking of an oríkì, these photographs bring the past into the present for consideration, and offer multiple meanings. 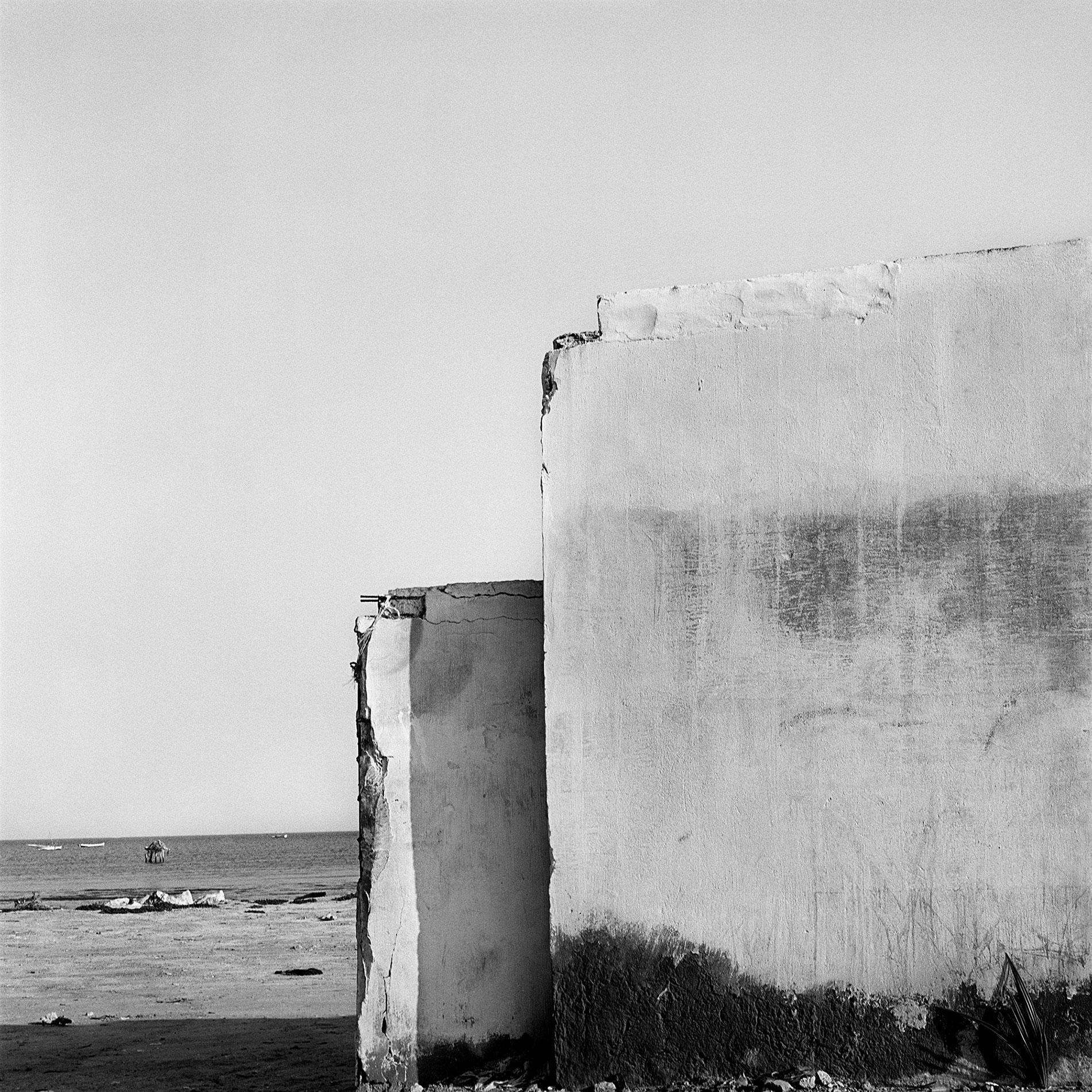 Over the course of the two years in which she created this series, Karray would visit these sites multiple times, experiencing them at different times of day, different times of year. In each visit she would ask herself “What can I do with this?” (Goni and Karray 2011). She describes this moment of reflection as one of meditation, where she contemplates the place and how best to communicate it visually. In one the harsh, strong light of a clear day spoke to the character of this place, whereas in another it was the shimmer of wet surfaces after rain that felt more appropriate. That Karray asks “What can I do with this?” aligns her practice with Akinbiyi’s, as he asked “Is every picture of mine relevant to this situation?” Both questions give insight into the complexity of their photographic projects, yet the precise meanings of the questions are not clear. For instance, is the “this” of Karray’s question referring to her experience of the place, or to the act of communicating the significance of the various sites along Sfax’s port? So too might Akinbiyi’s question address such things. No matter how it is meant, or what answer it implies, the questions themselves signal contemplation. Both photographers ask these questions so that they might do justice, as oríkì should, to revealing the character of a place. 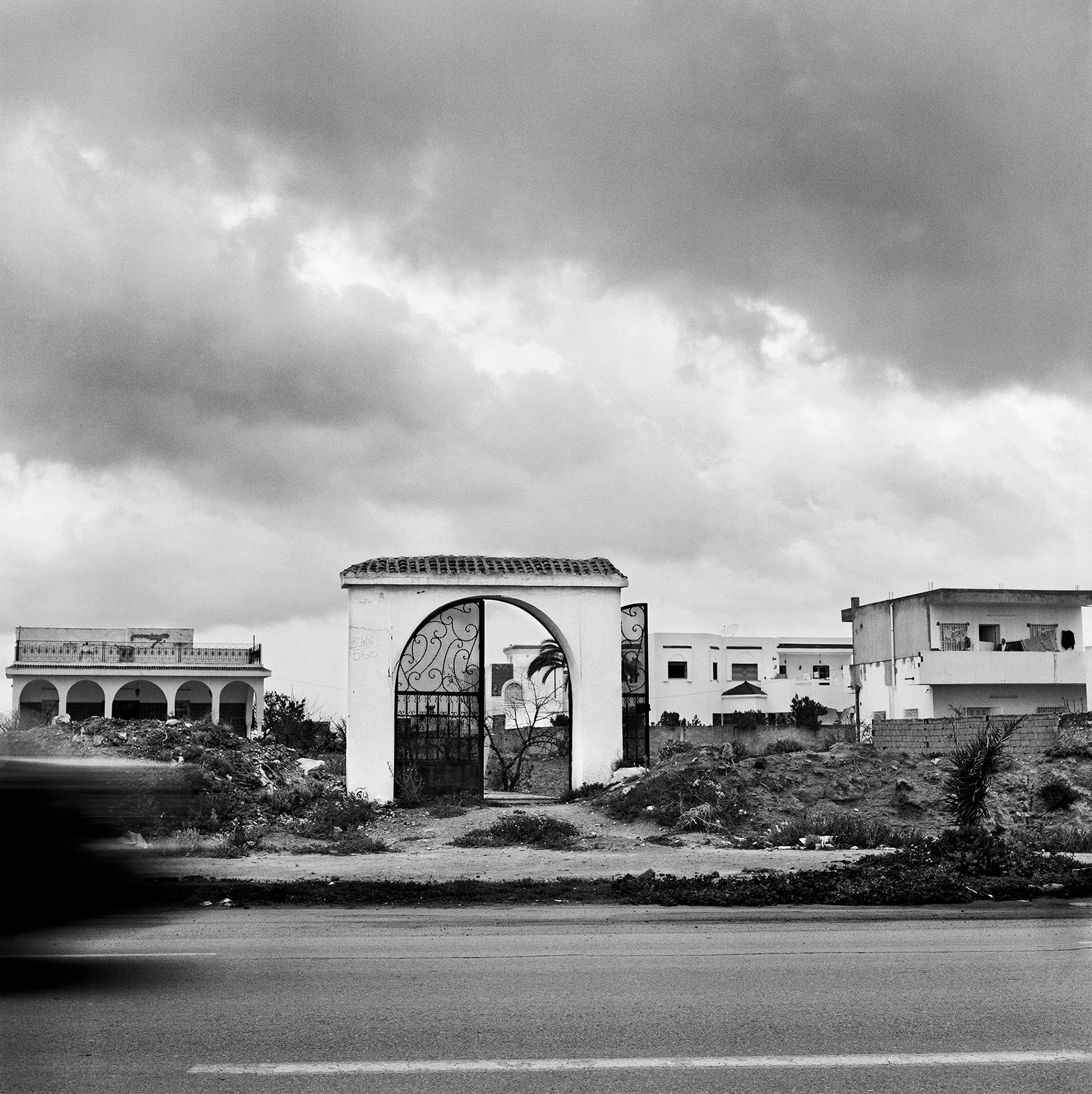 There Is a There There
Meditation on these places so as to better understand them is also what these photographs and photographers ask of their viewers. It is through sustained looking that viewers can be mindful of the places and attend to their various textures, their contradictory characters, and their layers of meaning. The artists give viewers a series to which they can return again and again. (…)